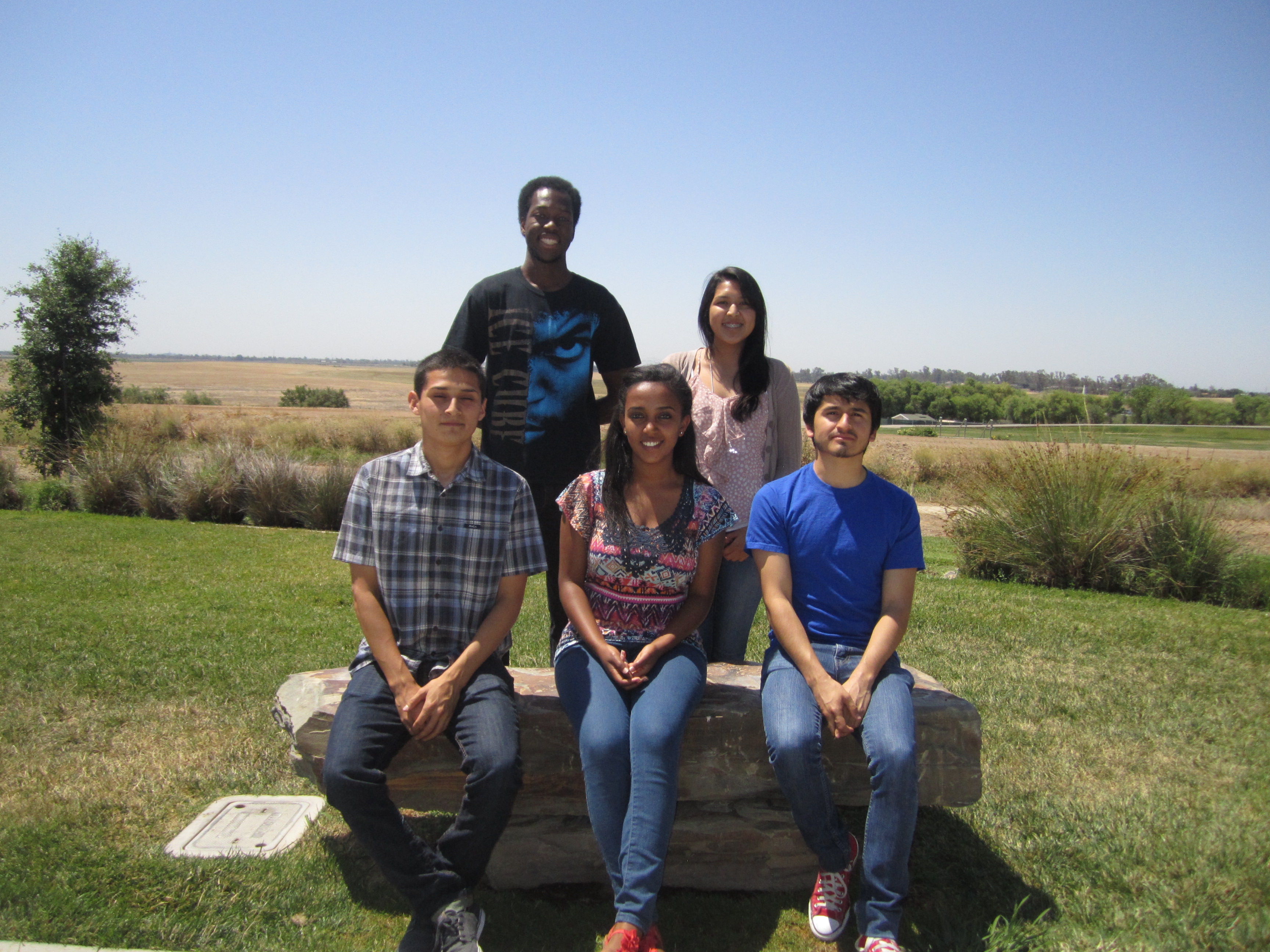 Hawi Gemeda is third year student in Biological Sciences, Molecular Biology emphasis. She will be conducting research with professor Patricia Liwang in HIV inhibition and inflammation. Observing people in Ethopia, this research experience is very exciting to her since she  has seen people suffering from the HIV/AIDS in these neighborhoods. After getting her graduate degree, she plans to give service for the underserved population around the world.
Production of Recombinant Enterokinase Light Chain
Hawi B Gemeda, Mike Jian, Patricia LiWang, PhD, Molecular Cell Biology, University of California, Merced
Enterokinase, or enteropeptidase, is a serine protease which cleaves after the amino acid sequence DDDDK. Recombinant Enterokinase (rEK) is commonly used to cleave off fusion tags during recombinant protein production. EK consists of a light chain and a heavy chain, with the light chain being the catalytic subunit. Many of the proteins of interest in our laboratory, such as 5P12-RANTES, are potent HIV inhibitors. These proteins are often recombinantly expressed with a fusion tag, requiring sequential enzymatic removal by EK cleavage. It is not feasible to use commercial rEK for large scale production of these proteins due to the high cost. A comprehensive search of current literature identified various methods to prepare rEK. We hypothesize that we can integrate and modify these methods to develop an optimized approach to produce rEK. The gene encoding the human EK catalytic light chain with a C122S mutation was subcloned into pET15b, pET28a, and pET32b expression vectors. The resulting plasmids were transformed into Escherichia Coli cells. rEK was overexpressed and then purified using an unfolding-refolding protocol. The product was analyzed for its specific protease activity. This homemade rEK is suggested as an economical alternative to the commercial enzyme. The development of this rEK production method will facilitate future large scale purification of HIV inhibitor proteins.

Jim Mendez Lopez is a second year undergradate student majoring in Mechanical Engineering. He is interested in research involving sustainable energy and new renewable energy resources. Jim expects to graduate in Spring 2016. In his spare time, Jim enjoys playing soccer and is also a part of UC Merced Men's Soccer program.
Assessing Soil Nutrient Fluxes and Ecosystem Health From Affected Areas of the Rim Fire
Jim Mendez-Lopez1, Louis Mielke2, Rebecca Lever1, Asmeret Asefaw Berhe1; 1University of California, Merced, 2University of Minnesota
Fire is an important perturbation that controls ecosystem health. Specifically in soil, fire can lead to loss of organic layer and biogeochemical cycling of essential elements. The Rim Fire occurred in the Sierra Nevada Mountains of California in August of 2013. In this study we investigated the role of the Rim Fire in lateral mobilization of topsoil and associated soil carbon and nitrogen stocks from hillslopes that were burned. Samples were collected from sediment fences that were put in medium and high slope sites burned by moderate and high severity fires and from slopes in different landform positions in the area. We analyzed the mass of sediment mobilized and compared sediments from the different positions in terms of soil color, pH, gravimetric water content, particle size distribution and nitrogen and carbon content. We also measured bulk density in the source hillslope soils. We found that in all slopes and fire severities sediment samples decreased in mass over monthly increments between February and May, with soil color also shifting from black to dark reddish brown, and pH measurements showed a trend in slightly decreasing values. This suggests that early deposits remove burned soil and could possibly store pyrogenic carbon. With the collection and analysis of more data we will be able to understand and model the carbon cycling in ecosystems affected by fire, erosion, or both.

Gema Rodriguez is a third year undergraduate student majoring in Molecular Cell Biology. She is working with Dr. Masashi Kitzawa conducting research to investigate the role of VCP and its diseases. Her research will focus on how muscle-like cells respond differently to stress in the presence or absences of VCP mutations and how those changes lead to muscle degenerative diseases. Gema expects to graduate in the spring of 2016 with a Bachelors of Science. After her undergraduate career, Gema hopes to obtain a Ph.D. and conduct clinical research or attend medical school and become a neurosurgeon. Apart from research, Gema also works as a student athlete-learning assistant, tutoring in various subjects including biology, chemistry and Spanish. She believes her job is very important because she helps fellow students build the foundation necessary for future classes. In her spare time, Gema enjoys volunteering at Mercy Hospital, exercising, playing soccer, backpacking, and spending time with her friends and family.
Disease-relevant mutant VCP dysregulates NF-κB activation and upregulates the expression of ubiquitin E3 ligases, Murf1 and Atrogin1, in C2C12 myoblasts
Gema J Rodriguez, Julio C Flores, Carlos J Rodriguez-Ortiz, PhD, Masashi Kitazawa, PhD; School of Natural Sciences, University of California, Merced, Merced, CA
Inclusion body myopathy with Paget’s bone disease and frontotemporal dementia (IBMPFD) is an autosomal dominant disease caused by mutations on the valosin-containing protein (VCP) gene. Over 80% of patients with VCP mutations develop progressive muscle degeneration. Its underlying pathogenic mechanisms, however, remain largely unknown. Previously, we have shown that disease-associated mutant VCP prolongs NF-κB activation in C2C12 myoblasts following an acute LPS stimulation. We hypothesize that the impaired resolution of NF-κB activation leads to aberrant transcriptional alterations, including up-regulation of inflammatory-related genes and muscle-specific ubiquitin ligases, which further promote degeneration of muscle cells. We examined the changes in muscle-specific ubiquitin E3 ligases, Murf1 and Atrogin1, following acute LPS exposure to C2C12 cells. Our preliminary data indicates an increased expression of Atrogin1 and Murf1 protein levels after NF-κB activation. To test whether VCP mutation exacerbates the expression of Atrogin1 and Murf1, we transfected C2C12 cells with wild type VCP or mutant VCP. Transfected cells were incubated for 1 hour with 1 μg/mL LPS as NF-κB activator, followed by 1-hour incubation for recovery without LPS. We expect greater protein levels of Atrogin1 and Murf1 in mutant VCP that may help to understand the underlying mechanisms of muscle degeneration in IBMPFD patients.

Cloud Computing: Benefits, Concerns, and Applications
Markus Walker, Mukesh Singhal, PhD., School of Engineering; University of California, Merced
Cloud computing is a way of delivering a seemingly infinite collection of hardware and software resources to customers as needed, with support for elastic resource provisioning and release, and ubiquitous access to the resources. Industry adoption of cloud computing is maturing at a rapid pace due to its benefits over traditional in-house information technology (IT) systems and services. Some of these benefits include the following: cost savings, fast deployment, scale/elasticity, consolidation, energy savings, elimination of capital expenses, resilience, redundancy, security and competitiveness. Although cloud computing has been shown to be very effective, there are many concerns with its daily usage. Recurring concerns come in various forms of data privacy as well as data security. Interesting enough, these are not new problems, but become more apparent in cloud computing. The focus of this presentation is to provide a general background on cloud computing. Firstly, I give a clear definition of cloud computing. From there, I explain the advantages the cloud brings and how it is applicable. From there, I will go over some of the technologies the cloud brings. Lastly, I will discuss data privacy and data security concerns across multiple scenarios and they're important issues.