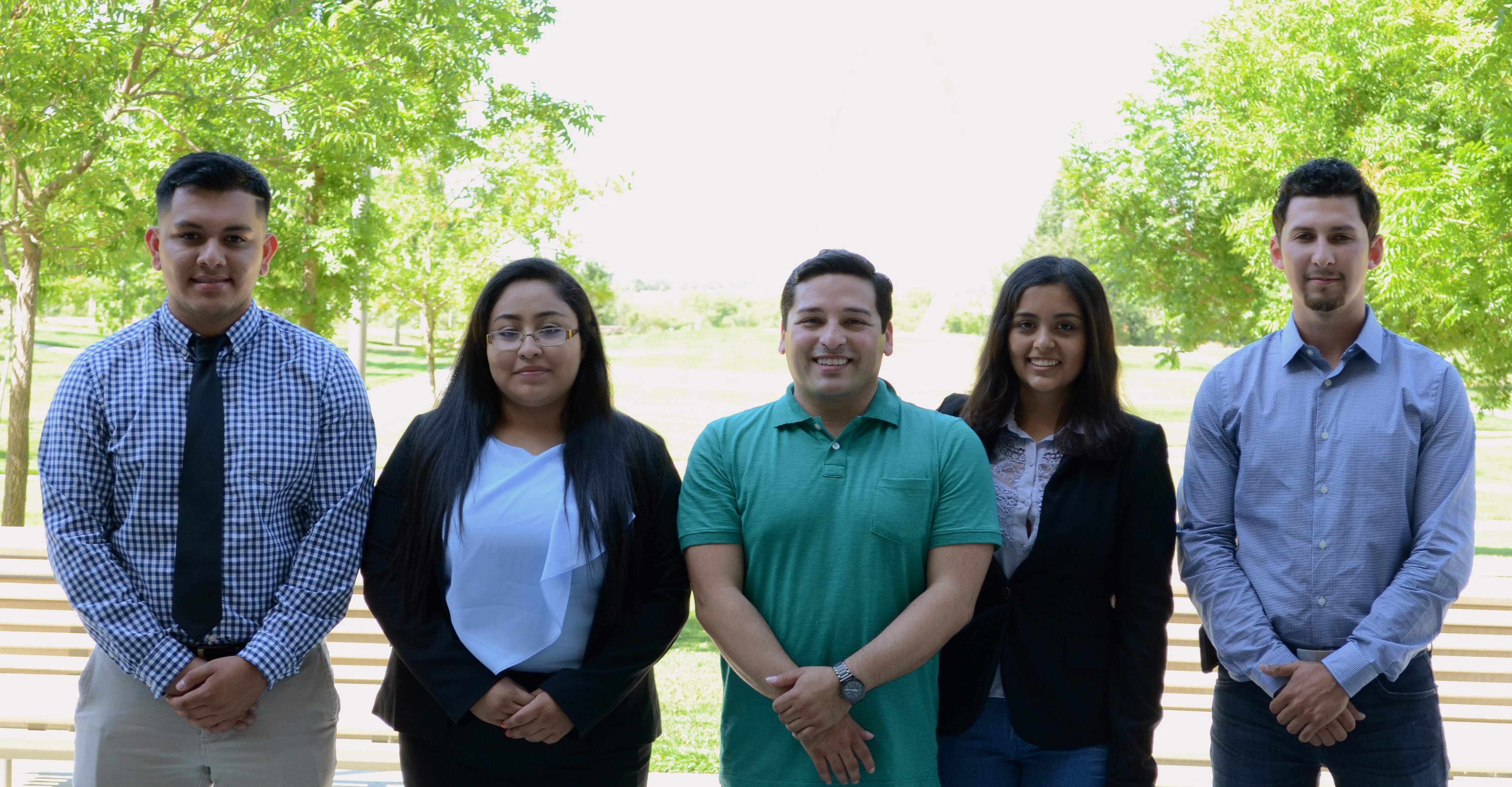 Lourdes Diaz is a rising Junior at the University of California, Merced majoring in Mechanical Engineering and minoring in Spanish (although she wishes she had minored in Physics.) Lourdes will be researching Origami-Based Folded Sheet Metal Parts as a method to improve designs in engineering. Growing up, Lourdes became interested in engineering as she helped her skillful father create construction projects that involved advanced knowledge of engineering and physics, she thought if her father was successful without a degree that she could do much more with one. Lourdes currently holds a position as a Spanish tutor and has recently acquired a position as an Academic Scholar for the Fiat Lux program at her school. Both positions involve helping underrepresented students succeed academically in their first years of college. Lourdes loves to help students that need the guidance that she needed when she was a freshman in college. Lourdes has two older sisters, Brenda, who attends community college, and Brianda. She also has a younger sister, Monserrat, who just finished the second grade and is quite intelligent for her age. Lourdes hopes that Monserrat will follow in her footsteps of pursuing a career in STEM. Lourdes’s favorite hobby among, swimming, drawing, and watching TV, is doing her make up. Lourdes and her sister Brianda are constantly competing about who has better make up skills and who obtains the most popular cosmetics first.
Energy Consumption in Origami-based Sheet Metal Forming
Lourdes Diaz and Ala Qattawi, PhD; School of Engineering, University of California, Merced
Origami-based Sheet Metal forming (OSM) is an innovative manufacturing process that is expected to exceed customary metal forming processes in terms of reducing cost, and improving material and energy use. Traditional metal forming processes are losing stature in the industry as they fail to optimize the manufacturing process of metal sheets. On the other hand, OSM forming requires less waste of material and can be produced at low costs. However, energy consumption is still a big concern as the energy required for this process has merely been explored. In the OSM process, sheets of metal are perforated with bending lines using a laser cutting machine. These bending or discontinuity lines aid the folding process of the metal sheet which is often folded manually using simple hand tools. However, there is limited information about the energy spent in producing OSM products. This research aims at studying the energy requirement to fold OSM parts by using simulation-based models to measure, record, and analyze energy consumption. Moreover, the proposed work applies experiments to test the energy consumed by laser cutting and bending machines. The results of these experiments are expected to optimize the design of OSM parts and provide guidelines of the most energy-efficient fabrication practice in terms of laser cutting and bending operations.

Stephanie Gamboa is a third year undergraduate student pursuing a Public Health major. Stephanie is a UC Regent scholar involved in various clubs such as public health society, Lambda alliance, and bible study. Stephanie is pursing a more in depth study of infectious diseases, this summer she will be conducting research testing west nile infection rates within two mosquitoes; Culex Pipiens and Culex Tarsalis. As a Public Health major Stephanie has gained experience in health promotions, where she has designed and implanted group projects to address health issues upon the student body at UC Merced. On the weekends Stephanie enjoys driving home to visit her mother and sister.
West Nile Virus Infection Rates in Culex Mosquito Species
Stephanie Gamboa, Eunis Hernandez, Andrew Loera, Karen Cedano, Bianca Rodriguez, Jennifer Mendoza, and Andrea Joyce, PhD; School of Social Sciences, Humanities, and Arts, University of California, Merced
The two main mosquito vectors of West Nile virus (WNV) in Merced County are the Culex pipiens species complex and Culex taraslis. The Culex species complex consists of several morphologically similar species which hybridize such as Culex pipiens and C. quinquefasciatus. The purpose of this project is to identify the frequency of these two mosquito vectors in different habitats in Merced County. In addition, we will determine the WNV infection rate of these two mosquito species based from the different habitats. Mosquitoes were trapped using CO2 baited traps, and then classified to species. Mosquitoes identified as the Culex pipiens complex or C. tarsalis were then tested for WNV. Mosquitoes were tested for WNV at UC Davis Center for Vector Borne Disease, and will also be tested at UC Merced using the Rapid Analyte Measurement Platform (RAMP) Reader. To date, our 2015 mosquito trapping results revealed that Culex pipiens were the most abundant. It is the C. pipiens are anticipated to have the highest WNV infection rate. The frequency of West Nile virus infection rates for the Culex pipiens complex and Culex tarsalis will be determined weekly and compared among the five habitat types in the county. Habitats with higher WNV infection rates may be prioritized for mosquito control efforts in order to reduce the abundance of insect vectors of WNV.

Jose Antonio Garcia is a second year undergraduate at the University of California Merced. He is currently pursuing a bachelor’s degree in Human Biology with plans of attending medical school. Jose has also worked for his family business for a large portion of his life (7 years) where his responsibilities included the input of data into Excel worksheets, customer service and sales. In the past, Jose has volunteered his time to help the local police departments in fundraising events and also in the Comforting Kids program, a program to help create normalcy for children who spend long periods of time in the hospital due to illness. Throughout his years, Jose has focused on hard work ethic and maintaining a good GPA. However, he has now decided it is time to deviate from the family business and direct his focus on establishing the foundation for his career through research and volunteer opportunities. He believes the change from theoretical learning to experimental learning will be quite a change, but nonetheless, a great experience that will help prepare him for the future. On his spare time Jose likes to take family trips, ride horses, go to the driving range and talk to his grandparents about their old wild adventures.
Angiotensin Receptor Blocker Increases Lipid Mobilization and Ameliorates Hyperlipidemia in a Rat Model of Metabolic Syndrome Fed a High Fat Diet
Jose A. Garcia, Andrew Lee, Ruben Rodriguez, and Rudy M. Ortiz, PhD; School of Natural Sciences, University of California, Merced
CD36 and lipoprotein lipase (LPL) are both transport proteins involved in lipid mobilization and triglyceride storage in various cell types; including adipocytes. Accumulation of excess lipids in non-adipose tissues leads to cell dysfunction or cell death. To address our hypothesis that ARB can improves lipid utilization, we measured body mass, retroperitoneal mass, adipose lipase activity, CD36 and LPL expression in five groups of rats; 1) Long-Evans Tokushima Otsuka (LETO) normal diet (ND)(n=6), 2) Otsuka Long Evans Tokushima Fatty (OLETF) ND (n=8), 3) OLETF high fat diet (HFD, 62% fat in food)(n=8), 4) OLETF + angiotensin receptor blocker (ARB) (10 mg olmesartan/kg??d ?? 6 wk)(n=8) 5) OLTEF HFD + ARB (n=7). Results demonstrate improvements CD36, LPL and lipase activity in OLETF relative to LETO. Body mass increased 38% in OLETF relative to LETO, ARB decreased by 20% relative to OLETF and HFD+ARB decreased by 37% in relation to HFD. ARB retroperitoneal fat decreased 16% in relation to OLETF and ARB+HFD decreased 72% in retroperitoneal fat compared to HFD. Results suggest ARB treatment increases lipid utilization and provides a source of treatment to ameliorate the pathogenesis of hyperlipidemia from a high fat diet.

Jesus Partida is a rising third-year undergraduate student in bioengineering. He is currently researching stroke rehabilitation through MRI Compatible systems at the Georgia Institute of Technology under Dr. Jun Ueda. Jesus Partida expects to graduate in the spring of 2017. Jesus is also involved in the SACNAS (Society for Advancement of Hispanics/Chicanos and Native Americans in Science) chapter at the University of California Merced. In the Fall of 2015 he will be Vice President of the chapter a step up from being the treasurer for the club the previous semester. He is also currently doing research with Dr. Anand Bala Subramaniam during the semester. This summer program provides Jesus a chance to perform research outside his field of study and give him a chance to see what he would like to do his graduate level degree in he is currently debating between Material Science and Engineering and Mechanical Engineering. In the future Jesus would like to teach at the college level in the field of engineering to many future undergraduates and motivate them to be the best they can be. For fun, Jesus enjoys playing video games particularly role-playing games as well as other nerdy games. He also enjoys going to Bakery Club and making desserts.

Jose Rubalcava-Cruz is a third year undergraduate student majoring in mechanical engineering. Jose is involved in Dr. Gerardo Diaz's research in plasma gasification. Jose expects to graduate in the Spring of 2017. After graduating from UC Merced, he plans to go to graduate school to pursue a PhD degree, work in industry for a few years, and after become a professor. Aside from research, Jose also works for PALS in the Bright Success Center as a peer learning assistant here at UC Merced. He especially enjoys this job because he finds it very rewarding in assisting students achieve their highest potential in their academic courses. In his spare time Jose enjoys spending time with friends and family, playing sports, occasionally playing video games, and ultimately learning new things and simply having fun.
Property Characterization of Steam Activated Biochar
Jose A. Rubalcava-Cruz, Sergio Pineda, PhD, and Gerardo C. Diaz; School of Engineering, University of California, Merced
Activated carbon is usually utilized in filtration systems for air, as well as, water pollutants. The main source of activated carbon is coconut shells, which are converted to biochar and then to activated carbon through industrial scale application of high temperature steam. Since this product is usually imported, it is estimated that 2 billion dollars are spent in a year purchasing this product. This project intends to find out if biochar from local biomass can be activated producing similar properties as the commercially available activated carbon. The conversion of biochar to activated carbon was performed using reactor designed specifically for this purpose at the University of California at Merced. The operating conditions of the steam-reforming reactor were determined by means of a series of tests with air and steam that determined parameters such as flow rate, operating temperature, and weight loss of the biochar sample. The flow rate of the steam was determined by using an orifice-tube configuration that was calibrated using air and steam as working fluids. The resultant activated carbon was compared with commercial grade activated carbon to determine its porosity, surface area, and fixed carbon. Using an electron microscope, the activated carbon produced with the reactor operating at low-temperatures near 250 degrees Celsius showed the formation of larger pores compared to that of the commercial grade activated carbon.